Waiting For A Stallion 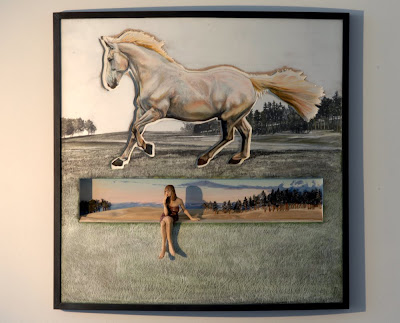 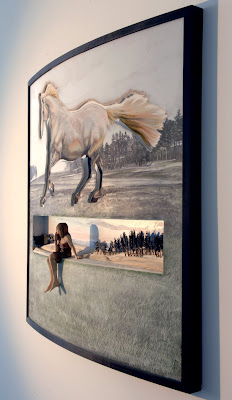 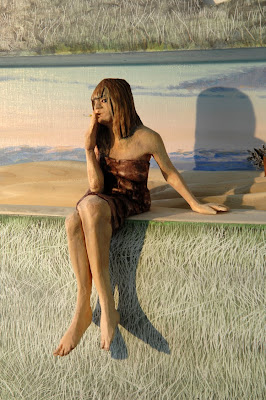 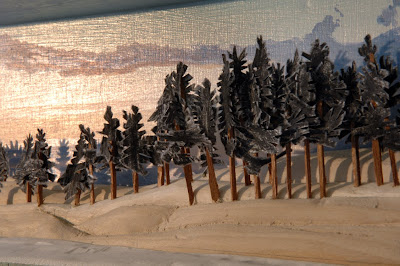 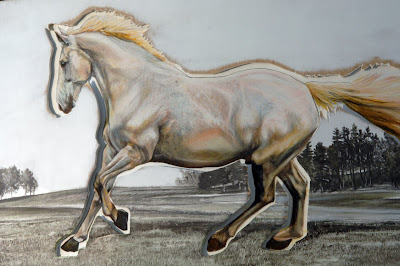 Waiting For A Stallion
Mixed Media, 2010, 32"x 32"
sold
This piece was a part of a show where notable people from the city of Hamtramck Mi. wrote down their dreams and gave them to different artists around town. This is my interpretation of one of the dreams I was given by Steve Cherry founder of a local radio station. In the dream (really a nightmare) while out in a wide open space a wild horse trampled his wife and she was stuck or buried in the ground and he thought they should wait for help and his wife who was calm, agreed. There was a little more to it but that was basically the jist of it.
So I decided to use as elements in my piece the horse, the hole, the wife and the wide open space. On some earlier pieces I was trying to do artwork inside artworks (smaller drawings or paintings that are part of the finished piece but have an independence to them), and I decided to do that here as well. I could make an entirely independent artwork using the concept of the hole that the wife is in.
So to create some depth and make an actual hole I made a curved picture frame and bent some birch plywood into it. I then cut out a horse shape and that made a kind of mat for my drawing of the horse. The bent shape of the wood distorted around the horse cutout which I think made a nice effect, and the curved shape of the piece also provided enough depth to make a diorama out of the "hole" (she is in a hole but not really, just a diorama).
She is now a wood carving smoking a metal nail for a cigarette. The horse is above her "trampling", the 2-dimensional background where the horse is and the more fleshed out 3-dimensional background where the girl is, is the same. Maybe a different time of day or year or maybe her stallion will never come to trample her heart, but she is calm and waiting patiently.
Posted by Unknown at 6:49 PM

I love this artwork! You're really creative, it's just great! Check my art-blog! http://paint4bliss.blogspot.com/

Thank you Ildiko'! I did check your blog, its terrific and very brave and beautiful. I love the no limits and no rules aspect to it. I try to do the same with mine.

Make sure to check out my monthly archives! Thanks for looking.

Promote Your Page Too